Pershing Park: The Evolution Of A Modernist Memorial

Landscapes are extraordinary, if only for their dynamism – an ever-changing marriage of static and living systems. They’re also reflections of our culture – truly political constructs describing the values of our society. Landscapes present a living canvas of pentimenti expressing both the site’s history and our own changing cultural values as time moves forward. Historically-significant landscapes require a nuanced approach to managing change, one that is respectful of the past, but that lifts the bell jar, so that history can be made accessible to twenty-first century society. Such is the case with our work on Pershing Park in Washington, D.C., revivifying a modernist construct redefined as a national memorial and a welcoming place of urban respite. 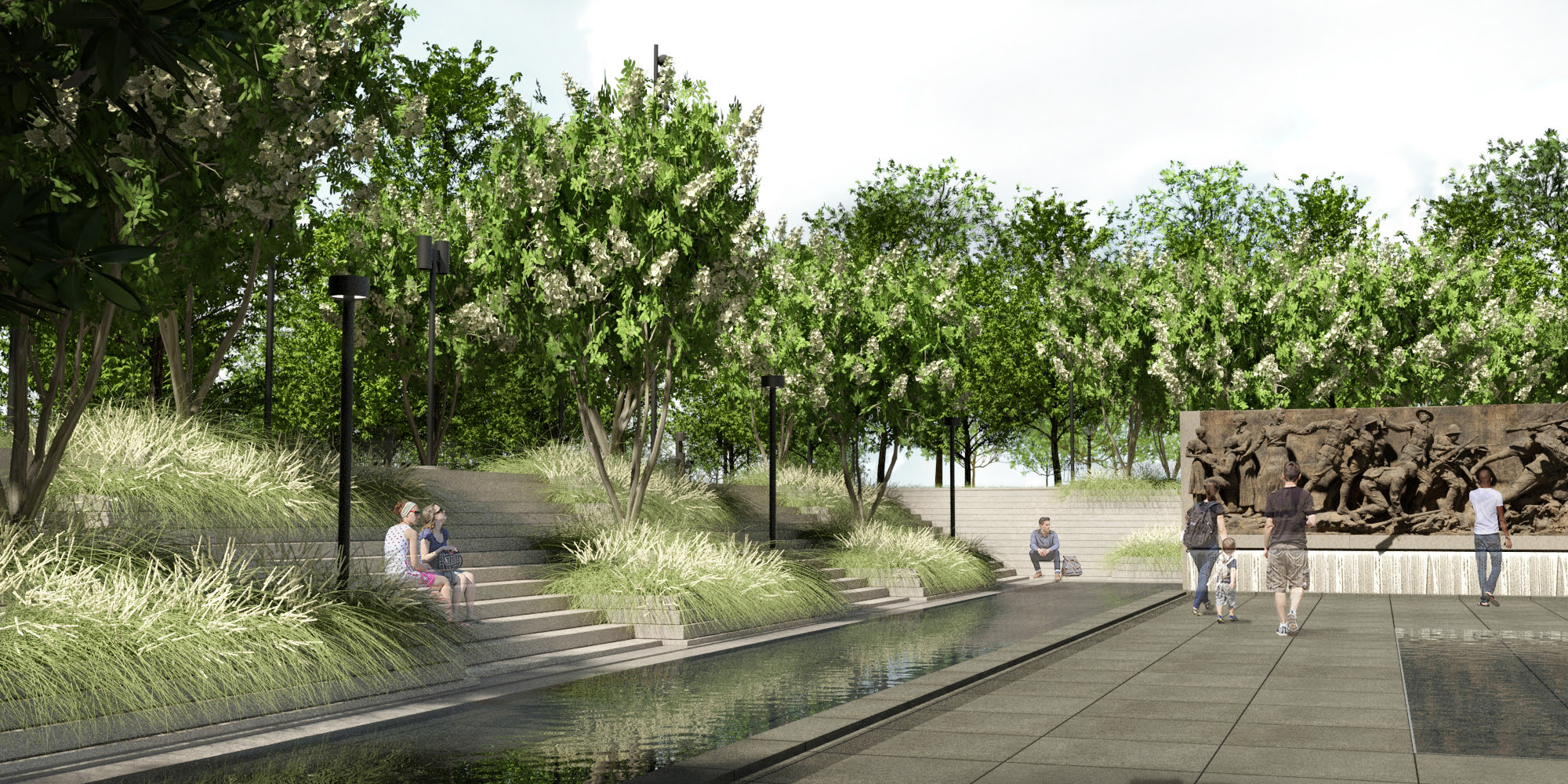 New Year / New Memorial
DAVID RUBIN Land Collective is celebrating 2020 with the commencement of construction of the National World War I Memorial. On December 12, 2014, the United States Congress redefined the entirety of Pershing Park, so named for the conflict’s formidable leader, General John J. Pershing, as the National World War I Memorial. Pershing Park, located in the monumental core of the nation’s capital at the terminus of Pennsylvania Avenue proximate to the White House, is a modernist construct by landscape architect M. Paul Friedberg. The expanded commemorative composition no longer focuses solely upon a monumental figure. Rather, in expression throughout the park, the memorial will shift from singular recognition to a broader, more inclusive acknowledgement of sacrifice and the United States’ role in this global conflict. 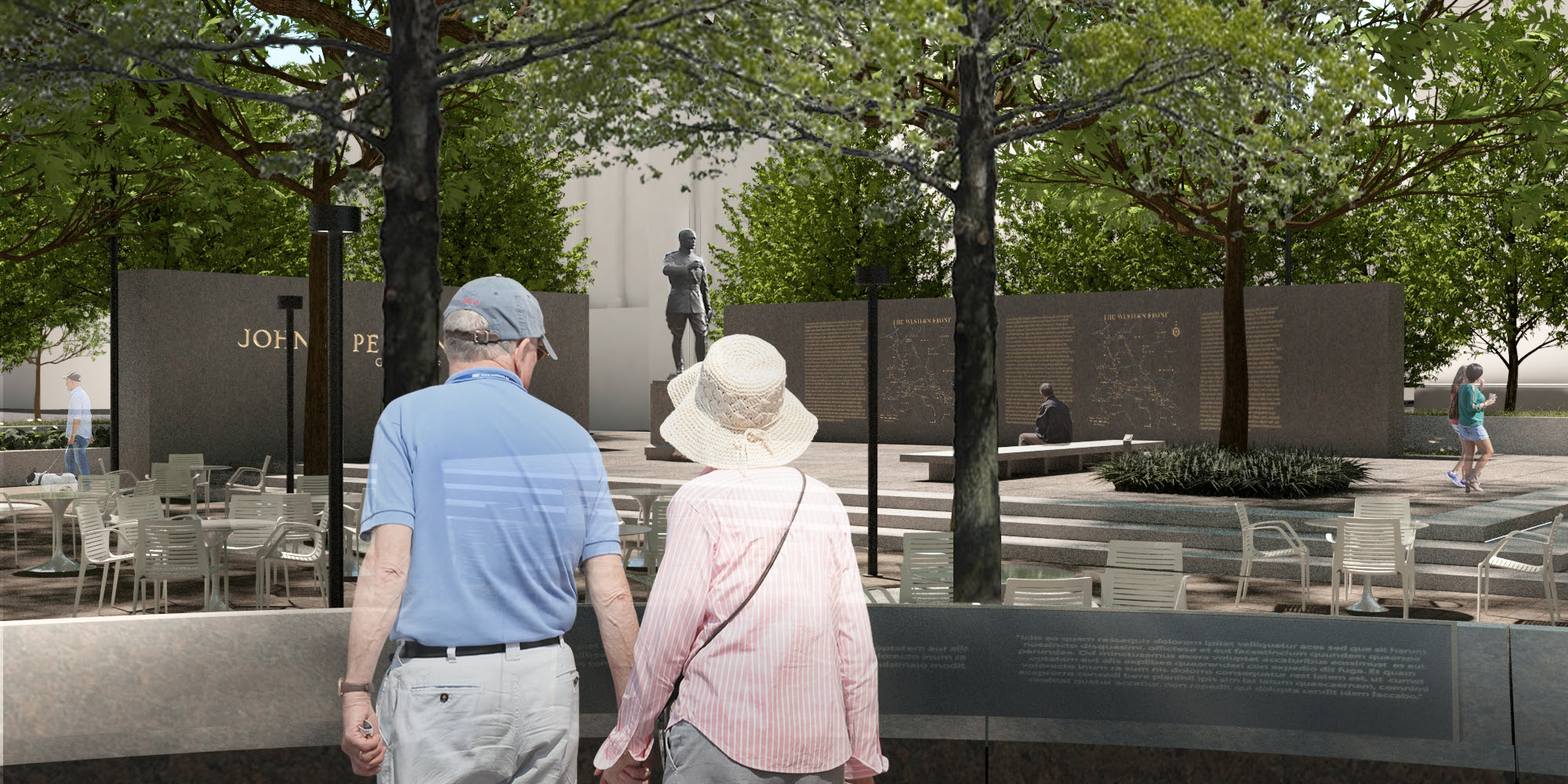 Successful Collaboration
Land Collective was selected by the United States World War I Centennial Commission to assist with the transformation of Pershing Park into the National World War I Memorial. Through a rigorous agency review process, the design gradually took shape as the project team found a balance between the preservation of a culturally significant landscape and the creation of a fitting national memorial within a twenty-first-century urban park. The project found success through this review process by means of an extraordinary collaboration between the design team and the agencies with oversight of the project, including The National Capital Planning Commission, The Commission of Fine Arts, and the National Park Service, among others. The design team was led by the project sponsor, the World War I Centennial Commission; with the architects of record, GWWO; competition-winning designer, Joe Weishaar; sculptor, Sabin Howard; and Land Collective as landscape architect. We are honored to be working in collaboration on this significant transformation.

Phased Transformation
Construction will begin with the revitalization of Pershing Park and incorporation of memorial elements, to be followed by the installation of the new memorial sculpture. The deteriorated components of the park will be restored, accessible routes will be reconstructed to meet ADA Guidelines, and the soils and plantings will be amended and updated to better fit the character of a memorial setting, inspired by the original planting plan described by Oehme Van Sweden. 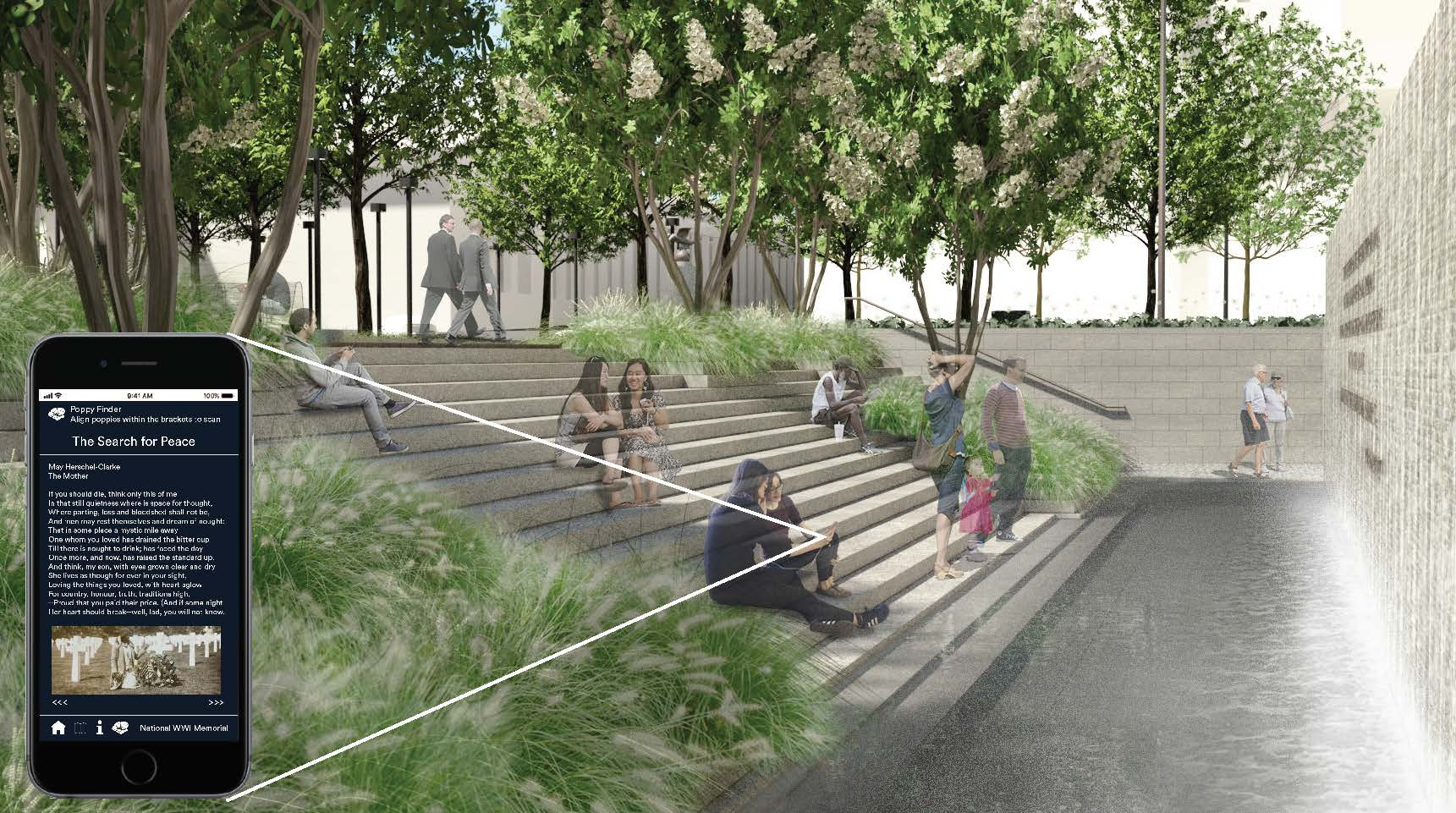 Accessible History
When completed, the memorial will serve dual functions as both a meaningful commemorative landscape and an accessible, vibrant urban oasis within the city. As with the original intent, the core of the memorial park revolves around a triad of focal points within the historic landscape; the existing memorial to General John J. Pershing, General of the Armies and Commander of the American Expeditionary Forces during World War I; a 58-foot-long high-relief bronze sculpture which portrays the journey of an American Soldier departing, enduring, and returning from war, complemented on the opposite side by a cascading peace fountain; and a granite belvedere, which replaces the currently vacant concessions kiosk, and acts as the interpretive hinge where visitors can discover the commemorative works within the park. A site-wide app with additional interpretive information sets this memorial apart from others as it allows visitors to immerse themselves within varying degrees of information as they learn about the forgotten war and discover how World War I was the war that changed the world.